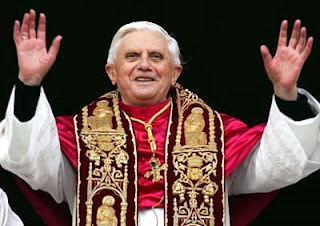 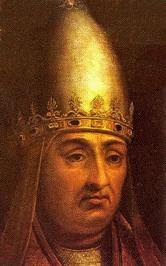 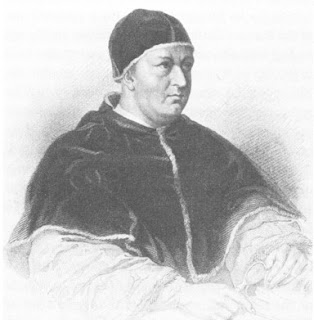 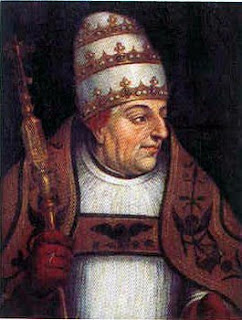 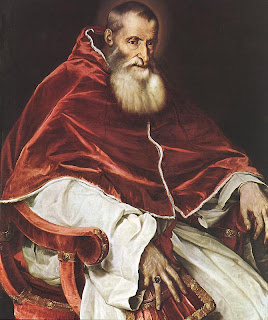 I heard Pope Benedict is coming to America. From what I hear he is OK!! One great thing about being Pope is that you don't have to be THAT good to be a Great Pope...
Check out some of these characters...
.
Pic #2..Pope Boniface VIII (1294-1305)...First of all he got rid of his predecessor, Celestine V, by locking him up in a castle, and letting him die of starvation. Boniface was an atheist, who had numerous gay lovers, and was eventually tried for heresy, rape, sodomy, and eating meat during Lent...He never attended his trial, he went mad, then committed suicide...
.
#3..Pope Leo X (1313-21)...The patron of Michaelangelo and Raphael, Leo was promiscously gay. When he was elected Pope, he was suffering so much from anal ulcerations, that he had to be carried to the conclave on a stretcher! It was Leo, that provoked Martin Luther to nail his 96 Theses to the Church door at Wittenburg, denouncing Church corruption!!!
.
#4..Pope Sixtus IV (1471-84 ).. Builder of the Sistine Chapel, He was the father to 6 illegitimate sons. One of them was a result of an incestuous relationship with his sister!..He was also responsible for allowing the Spanish Inquisition and the subsequent torture of thousands of 'heretics'.
.
#5..Pope Paul III ( 1534-49 )..Rome's biggest pimp, Paul kept some 45,000 prostitutes, who paid him a monthly tribute. He also poisoned several relatives, including his mother and niece to gain control of his family fortune. He also enjoyed an incestuous relationship with his daughter.
He once killed a Cardinal and a Bishop, to settle an argument over a theological point!!
.
Yeah, I guess Pope Benedict is an all right guy....
.
Peace...!!!
Posted by G-Man at 10:11 PM

Neener neener I even beat Lime. Very interesting post, but I came for the food!
You never disappoint with the foods!

And thank God I did not live in such times.

On trial for sodomy?

I wanna go for a ride in that Old Pope Mobile :)

Pretty much anyone would look fairly normal after the current guy's predecessors. Sheesh.:)

crimony! i knew there was a lot of corruption in the office during the middle ages but holy pants!

Galen, I just threw up in my head from that post. Thanks!

P.S. I'm assuming my jerky is in the mail?

The guy looks like the Evil Emperor from Star Wars....

Yeah, the church has put their faith in the hands of some real doozies over the years...

GOOD GRIEF! No wonder this world is messed up.

St Peter must be turning in his grave for some of those that came after him!

Thanks Susie, I hoped you read the Jerky post.

Strumpet...
AND eating meat on Friday!

Jenn..
I do have some for you!

Arghhh!! Those popes are the freakiest people on earth!!!