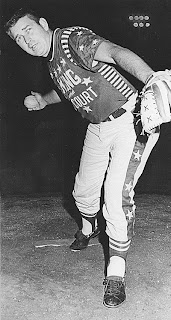 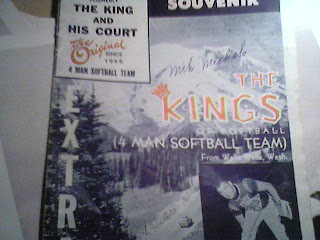 Hi Everybody...As many of you know, I was raised by my grandparents. My Grandpa was a hard working man for General Motors. He couldn't do a lot of things that parents did with kids, but he taught me about hunting and fishing, and he took me to sporting events like the Detroit Tiger's baseball games. He also took me to wrestling matches, the Harlem Globetrotters, and in 1962 took me to Atwood Stadium to see...The King and His Court!
The King and His Court consisted of a fire-throwing phenom named Eddie Feigner, and 3 other guys that changed several times over the years. They would barnstorm into town with much publicity and ballyhoo, and then challenge that particular home-towns softball All-Star Team.
9 vs 4. And unlike the Harlem Globetrotters, they played for real, and to WIN!!!
They started playing in 1946, and played up until 2000..
Feigner was amazing, he could pitch blindfolded, between his legs, behind his back, and from SECOND BASE!! The King and his Court played over 10,000 games...And in that span, Feigner pitched over 238 PERFECT games, and threw over 900 NO-HITTERS!!
I remember Driving home from out West in 1998, I was in some small town in Iowa getting gas when in pulled a Chevy Passenger Van. On the side of the van was painted WORLD FAMOUS KING AND HIS COURT!!! And sure enough, behind the wheel of the van was the man himself, Eddie Feigner. One by one they piled out of the vehicle to do whatever, I was absolutely mesmerized by the scene unfolding before me. I finished pumping my gas and sat behind the wheel of my van, flooded with memories of a great and loving upbringing, by simple honest people.....Eventually tears started streaming down my cheeks and I stared off into nothingness remembering that moment in time when me and Gramps went to see a Legend!!
.
I still have that program, signed by all 4 members of that travelling team..
Eddie Feigner died in 2007....RIP Eddie....YOU ROCKED!!!!
.
Peace...!!!
Posted by G-Man at 10:12 PM

you were brought up by grandparents?

Cool! I think Grandparents are always better than parents. They love you more & spoil you rotten!

But they bring up what turn out to be better human beings!

I have always wondered, what's in a game that make them so special...

Now with match fixing & all I think I know...

I think it's wonderful that you have these mementoes from childhood that remind you of so many poignant memories. Keep hanging on to all that stuff!:)

He was in G.R. a couple of times, and always got good press! Amazing man! I remember Ripleys believe-it-or-not(First version) showed him doing all the pitches you described, while in his prime...

what a great post. another insight into galen. what a special memory. i never heard of these guys but they sound amazing and obviously brought back a flood of good feelings for you when you encountered them years later. thanks for sharing. :)

Galen, you made me cry!! That was the sweetest post ever!!

You are going to be just as great of a grandpa some day :)

This is back to some of my favorite posts you do. You have so many stories trapped in the mind of yours that it is always wonderful when one escapes. This one is about my fave of all and might I add your grandparents did a wonderful job raising you.

I didn't know that about you.

Kids raised by older parents or grandparents always have that old soul feeling about them ...

Aw, Galen, this is such a sweet, sweet story.

That must have been one Hell of a show they put on and to be in such good company while viewing it, had to be the bomb.

i think you made that up...
about your grandparents.

These kind of memories Galen last a lifetime, as you very well brought out! It's funny how these things can come back to us later in life, what a wonderful experience this must have been for you kiddo!!!

Hey ya, G-man, I didn't know you were brought up by your grandparents. Interesting Galen-trivia. :)

Mona Dear...
In most cases you are right!!
I was spoiled, but NOT rotten...G

Sometimes a memory is enough to get you through a lifetime Sherry!
xoxbgxox

He was awesome Buff!!!

That was sweet Trini...
Thanks for always being so comforting..
You are like a bubbling oasis, in a desert of gloom..G

Jodiferous...
Thanks sweetie for visiting me ;D
Missed you terribly...G

Melissa....
Call me Boyo...=P
(I learned that from Strumpet)

Thanks Snow...
I just LOVE your visits, I always feel so blessed!
G

You're so cute with your smiley-faces.

Goyo...?
hahahaha
That was right clever there Miss Lisa...G
xox

You've taught me what little I know about that crap Strumpet...G
;D xox