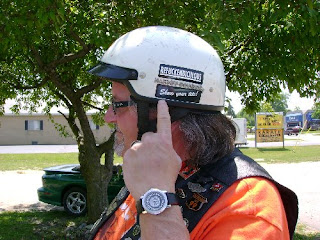 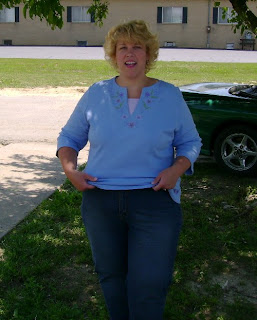 Thanks Serena, We are feelin good too....
Thanks

Very nice indeed. Oh and do you want me to show you mine G-man? See, you have to be careful what you ask for!

ha! tres amusant, monsieur g-homme!
you guys are so cool its not funny!
awesome that you both made the trip...
and whether she showed 'em or not
(you funny people!)
i'm sure it was worth the drive!
(especially if you picked up the tab
for lunch...!)
you look so cool
with y'all hair hangin' beneath your helmet
and that groovy earring
and sign looks beautiful as ever!
all spring like in her powder blue!

woohooo!!!!1 she is a temptress that one is!

what a very cool joint HNT you guys have going on here!

Yeah Barman, flash those Ta-Ta's...Thanks
( Thats as far north as her shirt got )

Always up for a little dare...

Ha ha ha you asked for it
HHNT Gman!

G-man - does that mean the person who wears the helmet has to show his tits, or is it just a statement of what the brain inside is wishfully thinking?

G, I guess Serena just got me going, yep Trading Places it is. It really is true, you are Mr Knowitall. I bow before thee.

JD, come on! I'll try to keep up with you..xoxox

Mona..? You never what?
Flashed your boobies?
Every American girl does that upon request. But you better have some cheap colorful beads to repay the favor!!

No Evalinn,
It's wishful thinking on my part. But in your case,it's like a plea!!
Thanks..xoxox

That movie Barman, was the apex of Jaimey Lee's Hotness!!

Very creative HNT, unfortunately I didn't notice the guy in the helmet but kept staring at the beautiful sexy blonde.:)

Oh there ya are! I prefer boobs over tits but what the f*ck, I'm just an oversexed Cat.lol

Mornin TC,
Jenn is always the Lady!
And a very good sport.
Later..

It looks like you all had a brillant time, what fine looking folks you all are.

Good Morning Queenie,
We just like having fun in the summertime....
Thanks for stopping by..
Galen xoxox

Half Naked Thursday!!
You post a pic of yourself...Some people post a naked pic, but you are only required to show ANY piece of yourself...Hands...Feet..
Nose...etc.
Just like your previous post would have qualified!
You are a beautiful woman Queenie, you should start playing this game also!!!

I agree about Jamie Lee G-man but I like the movie because I know someone that appears in the credits of that movie. They worked in the business end of the movie but that is OK. See I do not know all the celebs and run elbows with the famous people like you. I have to settle for saying, I know Martha Burczyk ... see, there is her name in the credit right there...

Oh and G, if you run out of beads, I bought a box for the occasion. Got them on eBay, honest. That should keep things interesting for some time to come.

I did not believe it then I thought he was bluffing!!

This cannot be a coincidence!! two ppl telling me the same weird thing!!!

Mona,
Though its true some will flash for beads, not all do. Its a matter of being noticed by the bead bearers, flashing sometimes gets them noticed. Just being pretty, being old, or being very young does it for some, too. Don't think that all people you see with lots of beads have been flashing.

isnt that a Mardi Gras tradition in New Orleans,
Mr Knoweverythingaboutboobs?
i would never flash for beads OR cash.
i might flash for a lover, though,
but i'd have to really like him...
i noticed the savvy and hip Mr Ratburn
flashed a boob several posts back...
perhaps you lovely gentlemen
can follow suit,
(with or without the tongs)
so we women
can feast our eyes
upon your bodily treasures as well....
i havent got beads for you though....
but it would be fun
just to reverse the trend
for a change...

Next time you meet some Michigan Bloggers let me know!

You guys look like you had a GREAT time. Two kids up to mischief!

Looking Good! May I post you in tonights favourites Galen? Happy HNT!

Hot Bike Cool Helmet. Am sure you balance it well G-Man.
Agree with TC, boobs more sexy and you can't fake it.

Happy HNT! Good to see both of you! xox

Of course she HNT'd. She's Sign! She's not afraid of anything. and it doesn't hurt that she's beeUteelishoush!

So where's your nekie pic, hmmmm?

I'm picturing a biker helmut....nothing else. What do think, ladies? Are we up for a little G-man beefcake? WOOT!

Uhh, Gman gave me the beef yesterday....um, I mean he bought me beef....you know what I mean.

Barman,
Next year on Mardi Gras, we are partying!!!

Mona, believe me, if you see a woman wearing many many beads.....she showed her boobies.
You don't give them away for nothing!!

Erika, I certainly will tell you..As far as Jenn goes? She would neuter me if I told.....xoxox

Tracy, you sure can!!!
Nice toes sweetie xoxox

PINK GINGER!!!!
G-Man sure has missed you!
Were you on vacation?
I prefer Hooters!!!

Snow White,
Nice to see you too. xox

You are up Sexy, come have a look!

You are such a lucky boy!
HHNT!

G man!! I REFUSE to believe that!!

I have worn beads but I have not flashed or whatever that is!!!

Charles! thanks buddy..I could hardly breathe until you came here!

I dont think I can ever wear beads again!!!
Thanks to you G Man!As my pearls & rubies,emeralds are laid to rest! ):(

Searabbit,
I am a lucky boy,
and I know it!!
Thanks..xoxoxox

Mona,
We are not talking about Fancy Jewelry, just cheap beads!!!

It's so nice to be missed. I wasn't counting, but apparently, you've done the math.

My 55 shall be up shortly. Till then rest assured that my tits are barely naked at this hour.

Love the skull & cross bones wall paper, by the way.

Hey, G-Man! Greetings from the west side of the state. If you drive out this way, I'll consider showing 'em! Of course, in this neck of the woods they'd arrest me for that sort of thing . . .
H(belated)HNT!

I'm there next week.

LisaPizza,
I loved your last 55, but Susie is still the host. I'll certainly come over and read yours.
Thanks for the kind words...G-Man

Bunny,
Are you kidding?
It would be well worth the drive to see thoses Baby's. Thanks xoxoxox

Queenie,
You in HNT every week?
Look out America!!!
HAIL BRITANNIA!!!!
xoxoxox

` I don't care if she did or didn't. But did the penguin?