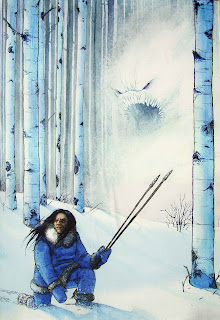 White folks call it....Wendigo Psychosis.
A condition where sufferers develope an insatiable
desire to eat human flesh.
The Algonquin Tribes claim that once a Human tastes
Human flesh, they become ONE with the Wendigo!
Winter....1878.
The family of Swift Runner was starving.
His youngest son just died.
He could feel the Wendigo beckoning.....


Zombies aren't just a Caribbean thing ya know.
Poor Swift Runner, he ended up eating his son, then killing
his wife and the rest of his family and eating them too!
In the Spring after his heinous acts were discovered, the Army
hanged him.
If you or anyone you know has tasted Human flesh or written a Friday Flash 55
Please come tell The G-Man
I will visit, read, enjoy, comment....Then BOOK!!
So from the most Cannibalistic host from coast to coast
Have a Kick Ass Week-End!!

ha...yeah there are def cases of canibalism...a kid i know has a zombie survival guide that lists known cases in the back...cool 55....does it taste better with steak sauce? smiles.

It sucks becoming edible. You're up there where the Wendigo hangs, too, man--I'd be watchin my pork chops.

Well, that's a bit yuck. Or maybe it's just the vegetarian in me speaking.

Jesus G-Man. I guess you must have seen Tarantino's new flick!

yick. glad i just had latkes and applesauce tonight!

What a great coincidence... this is the week I picked to be vegetarian!

(Not permanently; just for the rest of the week.)

Next week I'm back to the joys of meat... though I'll stick with pigs and cows and chickens and whatever they make sausage out of.
(I'd rather not know).

I mentioned you... sort of.

...always hungry and searching for their next victim! I looked this up... I thought this was supposed to be non-fiction. Yikes. Mine is true, unfortunately.

I dropped the ball last week and didn't get around to everyone's 55's. I apologize - as I really do enjoy these snippets of creativity.

I would cook up nice and greasy with a crispy skin. Like a pig at a luau.

Are there meatless substitutes for vegetarians, sort of like the human-flesh equivalent of tofurkey?

I've got a backlog of return visits to make, but things are settling down a bit here...I think.

hell no!!! methinks vegetarianism's the way to go...

Ewww .. but guess survival makes you do weird things !

Some talk for you !

is chewing your nails a form of cannibalism? What about eating the wi...naw lets not go back there this week...anyway I remembered it was Friday, well no I really didn't until I read alice's 55 then Iplayed here

OMGoodness... remind me never to go wherever that place is...But then my teen always tells me she'd survive ok in the Zombie apocalypse. I think I'd be her 'first' gulps......lol

She did it her way

Have a great weekend...no eating humans allowed. ;) Unless they have some brown sauce on them

"Pleck- fla-"
There are such stories about, ship wrecks and so on- Thanks for
sharing. I do eat meat but have no
desire to travel there!

Ha. What comes around goes around! Waste not want not. Waist not want not? wendoyougo nuts/?

Hope you are well. Here's mine. Going to the dogs more than stomach.

Have a great weekend. k.

Mine's up. Happy weekend to you!

I wonder how much cholesterol there is in... oh, um, never mind.

I'll pass on the cannibalism jokes, and just mention that occasionally fairie's will bite.

Hurts like hell, but it is SO worth it.

Love the story. I keep lots of food on hand for winter. Just in case. Can't have the family go Wendigo.

Love that photo and your story! you've inspired me to get with it before the end of the day. That Brian...what a show off. And I love hedge's comment. "I sucks to be edible."

Hmmmm...gives a whole new take on the phrase 'bite me.' Lol, wonderfully gruesome G-man!
Here is my Tolkien 55

Hey, if you can give life, you should be able to take it away. That's parenting 101.

I would have to be eating lunch when I read this! Need a new designation. Maybe NSFM?

I was searching for poetry and ended up with cannibalism! I'm keeping it light and simple.
http://journeyintoelderhood.blogspot.com”> linkword

That is seriously creepy!

My 55 may throw some off at first, it is broken in two, explanation at the bottom of post...

Thanks for your 55
may your week ahead bear no cannibals

Hope I never have too yuck

Hope I never have too yuck