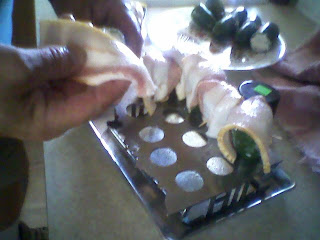 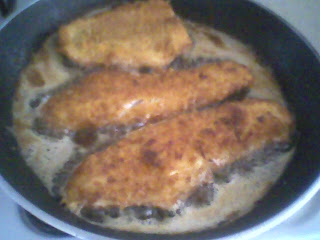 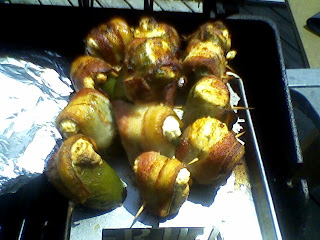 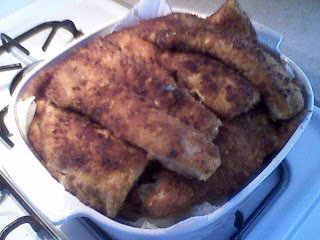 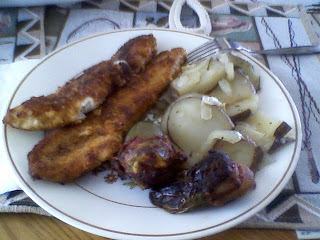 I've been waiting for this meal for YEARS!!
Never-Ending Walleye!!!
The first pic is assembling the Jalapeno Poppers. I made a stuffing concoction using sharp cheddar, and chive cream cheese. After thoroughlly cleaning a dozen peppers, I filled each one with the mixture. I then wrapped a 1/2 slice of bacon around the top, and stuck a toothpick through the top to keep the bacon in place, which in turn kept the filling inside. It was then placed in a Pepper rack.
The potatoes were thinly sliced along with an onion , and placed on a sheet of bacon lined aluminum foil.(yeah Baby) I then covered the top with more foil and crimped the edges.
We then turned the grill on low and cooked the taters and poppers for about an hour.
The Walleye was pan fried after dipping them in an egg wash, and coating them with a mixture of crushed saltine crackers and Cheez-Its.
The Cheez-Its not only added a different flavor, it also turned them a beautiful golden brown.
The last pic is my plate....
Trust me, I've had meals all over this country, but very very few better than this one was. To make things even better....It was with good friends!!
BTW...That dish of fillets was much bigger than it looked.
I'm still smiling...
Peace...!!!
Posted by G-Man at 9:24 PM

Wow, that looks fabulous! And of course it tasted as good as it looks.

Ohhhh, I haven't tasted freshly caught lake fish for years...and years. I'm from northern Indiana originally and grew up on bass, perch, bluegills, and bullheads (I think that might be a HOG!) I know that bullheads had to be skinned while the others were scaled. Thanks for the vicarious tasting; my mouth is watering. And you're absolutely right, do the traveling, fishing, hobbying, playing, visiting while you can--I'm glad for you!

Well now, I "know a thing or two" about that--eating!

I just went on my two-week fast, and reading your blog is a huge shot-in-the-arm. It gives me strength if I can get through your virtual dinner without raiding the fridge, I'll be well on the way by tomorrow. Thanks!

I think there's more grease in that one meal than I had all of last year! Cheeze-Its???

Having never tasted walleye, I'm havin trouble goin there. I'll just believe that you believe it was good.

I don't think I've ever tried any of those.
Congrats on your "lovely blog award!"

I don't believe I have ever eaten Walleye, but it sounds and looks delicious.

It's the middle of the night and sleep is eluding me. (I wrote a poem not too long ago about a sleepless night.)

So....thank God there are blogs to read anytime of day or night.

Galen where is Bryan? his birthday is on the 1st of July!

I am assuming you did NOT re-instate your PETA membership.

But the fish looks good.

if you are ever abducted, tell your wife to look for you here. you'll be around my kitchen or bbq cooking...

damn G you guys know how to eat!!

Flew into Canada fishing 4 times...Nothing to do but catch Wall-eye, cook, and eat them! Drakes batter mix,with Lawrys seasoned salt, and beer- to make batter... egg wash is a good step too! Poppers looked great also!

I learned something here.

There is nothing one cannot put bacon on.

You do realize that you have never cooked for me, don't you?

I don't care for bacon but it all looks delish!

I do make a dish where I take water chestnuts and wrap them in bacon and bake for a while to crisp up the bacon, ...then slather them in BBQ sauce... (I make my own and then add some bottled to it for a great sauce) and bake them again for 15 - 20 mins more.. I do love this dish even with Bacon....but if it's not really crisp, bacon gags me :-)
Your meal looks fab tho!
I wish I could have gone fishing with ya all! :-)

Thanks everyone for visiting and commenting. The last 2 days of the month are always a bit crazy, and I haven't been able to visit everybody. Forgive me....G

Sorry I had so little to say that anyone would care about that when my computer got infected I just never came back. I certainly missed everyone. Hi Mona.

I am not much of a fish person but somehow I would imagine you do those fish up proud like everything else you cook G.