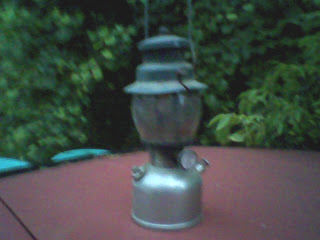 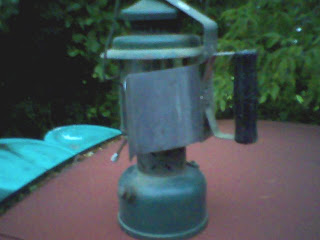 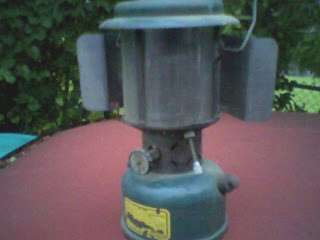 Camping anyone?
The first lantern was always my favorite because of the Steel Base.
It's a Coleman, and probably from the 50's.
The other lantern is kind of an interesting novelty. It's a Smelt dipping lantern!
...EXPLANATION...
Back in the late 40's, Salmonids were first introduced experimentaly into the Great Lakes, since commericial fishing had decimated sport fishing. To feed these fish a feeder fish called a smelt was also introduced.
Eventually the Sea Lamprey killed off the Salmon and most of the native Lake Trout. But the smelt, with no preditors, EXPLODED!!! They became so thick when they ran upstream in the Spring, that you could net a 5 gallon bucket in about 3 dips of a net. For about the next 50 years Smelt Dipping became a Rite of Spring in Michigan.
But with successful Lamprey control, and an agressive hatchery program, the salmon, Steel-Head, and Walleye, have all but made Smelt Dipping disappear.
...
OK, so you are in a stream, drunk, wearing waders, and holding a net, you are dragging a laundry tub in an innertube to deposit netted smelt, you DO need to see where you are going right???
hehehehe...Smelt Dipping Lantern!!!
It's rare...And of course, they BOTH work.
Peace...!!!
Posted by G-Man at 9:59 PM

Peace to you also, Mr Man.

We used to smelt and my grandmother's on the Wind River in Casron, Washington. I miss smoking those little things. OK, they were almost all bone - but yum!!

when will this fish topic stop...

Now a lantern associated with Walleye...seems like a stream of consciousness!

The Coleman Company would like you to retire your lamps and buy new...don't do it.

No Mona...
A lantern associated with Smelt!

Ya know, I may just turn this into a Fishing BLOG....

I have been smelt drinkin', as we called it... Up by Cross Village- it snowed at me (not on me!) West wind off Lake Michigan shut down the run- got about one gallon...sure do miss those days!

interesting history of how smart people screwed up a natural habitat but groovy lanterns.

there's a reason for everything, sometimes we just don't know it....

I grew up camping with those COleman lanterns. Well, not that old, of course.

Now the damn things are battery powered. I love the old ones. Peace to you my friend. Aloha

Fascinating as always. I have an old steel colman ice chest. Well I have it but it is actaully someone elses. I should see if I can find them so I can give it back. Gotta love coleman especially from years ago.

I have never been smelt dipping but now I understand what it is all about. Thank you.

My Grandparents had those Coleman Lanterns in their house in the country before they had power hooked up to the place. I loved the smell of them, it was comforting.. Nan used to put a lantern on low wick in front of an old mirror in the bathroom to we could see where to loo was in the night :)

Interesting fish tale! I didn't know any of that. Of course, I don't fish. Or camp. Unless it's in a Marriott.:-)

Thank You all for visiting and walking down memory lane with The G-Man...;-)

What a great nostalgic post. I grew up in Michigan, as I think you know by now, and used to go smelting with my dad. Those little buggers are tasty. He used a cap with a lantern on top like a miner.

Getting a topaz ring as links london jewellery jewelry gifts from better-half is no lower than an awesome joy. discount links of london bracelets Many ladies do admire such jewelry sparkling through charms links of london their fingers. If you may get to own one as gift, links of london silver watches you will definitely appreciate such beauty and elegance for high class cheap links of london necklaces type of jewelry. Those who know what the actual worth of gemstones will links london pendants certainly love to have one added into their collection.