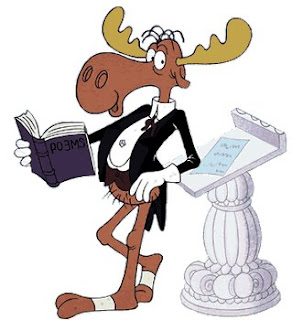 Hi Everybody, if it's Wednesday, it must be time for 'Ask Mr. Knowitall'...

Dear Michelle..."Well I knew this chick named Helga that could ram her way...er, Naww, thats another post...OK, No one knows for sure, but many scholars maintain that Mother Goose was actually one Elizabeth Foster Goose of Boston Mass. In 1692 when she was 27, Lizzy married a widower named Isaak Goose and immediately inherited a family of 10 children. One of her step-daughters married a printer several years later, and the printer loved listening to 'Mother Goose' recite old rhymes to the younger children. In 1719 he published a collection called Songs For The Nursery, or Mother Goose Melodies"..

Dear Shari..."In the 1600's, Louis XIV of France added a few inches to the heels of his boots, because like all Frogs, he was a shrimpy Mofo!! To his annoyance, he started a fad in the Royal Court. Soon, everyone was wearing elevated heels!! So he made his even higher..but so did everybody else!! This went on until it got ridiculous. Eventually the men's heels got smaller, but the women's heels stayed high. In the 1800's, American women copied the styles of Paris and the high heels...called 'French Heels' at first, they soon became part of American fashion."

Jill Klutz from Rancho Wino California asks..." Are you afraid of anything Mr Knowitall?"

Trailotrashophobia...Fear of living next door to Britney Spears

Xenophobia...Fear of foreigners and unfamiliar things

Awwww, Fuck It..Pantophobia...Fear of everything!!!!"

Ha! Your source is wrong. I wore the first high heels back in the 17th century. You're right about Louie, though. He was a shrimp. And a MoFo. Whew, that's some list of stuff you're scared of. I'm glad I'm not the only one.:-)

well now i know what shrimpy mofo to blame for the scourge that are high heels. gimme my birks, screw the heels.

wonder what the fear of them would be?

and if old woman who lived in a shoe from mother goose's nursery rhymes was afraid of shoes what would she do?

fear of flutes...very funny G-man...
that was quite the post!

I'm not scared of flutes...

Cos there was this one time...

LOL that was cute I am with you fear of everything!(j/k)

fishIchycooterphobia.....
Now there is a fear even I have! I have seen pictures of THAT and it was VERY frightening!!!!!!!

is you skeered of anything else?

Genophobia- Fear of sex. Just had to add that one.

How about fear of fear? I love it. I promise to keep my flute well hidden when ever you are around. Boy did that kind of sound dirty. Yikes.

Quick on the draw there Lime...
Do they make Birkenstock heels?
xoxox

Serena..
Yes baby, I do know you LOVE your Heels..
(Personally, I prefer your toes)
I'm glad you enjoyed my little info-fest..
xoxoxbgxoxoxox

Auloyentaphobia..
Fear of Jewish chicks that play the flute..
xoxxoxoxoxox

Strumpet...?
Now THATS a flute that would be fun to play!!
xoxox

Gabby Gale..
Don't be such a scaredy cat!
xox

LW...
I know what you mean, it looks more like a pound of raw liver..
Thanks baby..xoxox

Breazy...
Nope, but thanks for asking!
hahahahaha..xox

SignGurl..
You mean Jennophobia?
Fear of sex with Hot Talented Blondes?
(That can kick your ass)
xoxox

I'm dying here! That is too funny...yeah, I know I'm a klutz. Love the Brittney references....too funny!

You had me laughing out loud, G, before I even got to the fears section. Jill Klutz from Rancho Wino California was just too funny.

You grow weary too easily, G. We need to get you a pocket rocket to get you a real workout just to hold on to it. The only workout you might get from that Harley is if you drop it, then when you lift it, you're going to drop things that look like bearings or the counterparts to bolts.

I just knew frenchy was involved with them there high heeled shoes.

Thanks Charles..
I did ask permission first you know..hehehe