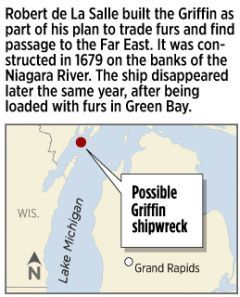 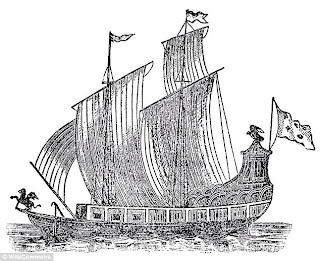 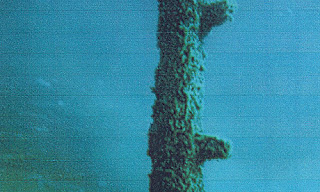 Compared to the roiling, violent surface.
The slow eerie descent into the dark abyss of
Lake Michigan was serene. Six tons of Pottawatomie
furs snuggly stacked below deck would never reach France.
It's seven cannons silenced forever.
Silt swallowed the hull, leaving only the upright mast to beacon
it's final destination.


After 334 years, divers finally think they have discovered where the
Griffon may have sunk. Rights and claims by France have slowed down
announcing the find publicly. I say Finders Keepers.. Fuck France!!!
If you or anyone you know has found The Griffin or written a Friday Flash 55
Please come tell The G-Man
I will visit, read, enjoy, comment....Then BOOK!
So from the Frogiest host from coast to coast
Have a Kick Ass Week-End!!!
Posted by G-Man at 8:00 PM

No WAY!! I may have to write "The Wreck Of The Griffin Fitzgerald."

Can't wait to see the furs and return them to the little critters' families.

that is really cool...it speaks to the indiana jones in me...always wanted to find some kinda old history like that...cool find...

and why clive cussler has fascinated me too...thanks for stopping in today pops....tagged a fresh 55 on the end...

and no sounds this week---all words---so no questioning the legitimacy of the 55...ha..

Um, has anyone told France that furs, unlike gold bars and pirate treasure, may have slightly altered in the interim since the sinking, and no longer be suitable for those beaver hats that were all the rage back in the 18th century? Love the nautical historical undersea 55, G.

Six tons of Potawatomi furs?
Wow. I'm part Potawatomi; maybe I should ask for one. ;)

All fart jokes are welcome.

It's amazing how truly deep and mystical the Great Lakes are. Yes, finders keepers always settled even the most stubborn when we were kids, Galen. :)

Sicker than a dog, but I wrote this earlier in the week before the bug pulled me under...

"Fuck the French" just sounds good on the tongue. It should be said everyday, whilst lifting a cup of coffee, tea, beer, wine, or can of diet Dr. Pepper.

FUCK THE FRENCH. Three little words that convey so much.

"The slow eerie descent into the dark abyss of
Lake Michigan was serene..." Very nice!

Back in late 2011 they were going to decide what to, preserve it in place or bring it up to restore it, all depended on what the found. So... what did they find? AND it's almost due west from Petoskey!

Long day and I ALMOST forgot it was Thursday! Pretty tuckered out turning in for the night ... Will play tomorrow bright and early.

I don't think those furs are going to be any good now. Barnacle hat, anyone?

Considering what it will cost to raise, restore and display the ship, assuming it really is the Griffin and is salvageable, the French would be wise to let the Canadians keep it and foot the bill.

Feelin' all goofy, romantic tonight (no, this is not autobiographical)

Ah, the adventure of finding a shipwreck. There are dozens of them still off my shores waiting to be found.
You'll find mine here.

A very dreamy 55, G. Shipwrecks have always played with my imagination, or vice versa, and I will not forget this story of The Griffin. One of my favorite books is about such a find:
Ship of Gold in the Deep Blue Sea.....You would need a long kick ass weekend to read that one!

Let them have their beaver skins. They are French after all and will eat just about anything.


Yeah someone said God damn it Durfee it's Friday do something

I love your 55 from beginning to end!
thank you G.

Typical of the French to let others do their dirty work for them. :)

Yes, I have returned to the fold and left you a 55 to read. Have a great weekend!

How interesting! Sunken ships are always so mysterious and romantic. I'm late, but I'm here for the party!

I'm sure they already cashed the check from the insurance claim so no double dipping France on the wet beaver pelts.

But ya gotta admit the French got it going on in the pastry department!!

And I'm gonna forget I just read your directly above response to Nessa. :)

now, going to slip into another pleasant vortex here for a while......

Surely those water logged furs are not very wearable any more after so much time in the water...if there's anything left at all.

I've never been so sick in my life.

I love your poetry - what a perfect blend of word choice, narrative and imagery!

Thanks for letting me play.

Ha - he's froggy - but he's no FROG! Hi Host! Very interesting post. I really enjoyed pics and learning about this and your poetic view of the sinking. Really cool.

Er...I think the French can have their waterlogged furs. Here's mine, and I'll be around to read everyone's tomorrow. Thanks G-man!

My late post this week has a boat, but it's just a little one.

i'm a little vague on your feelings regarding the french ;)

And as to the French, they generally do a pretty decent job of fucking themselves. . .