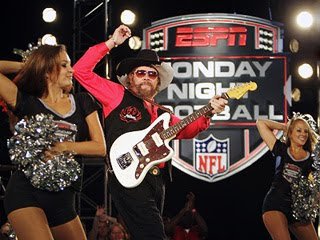 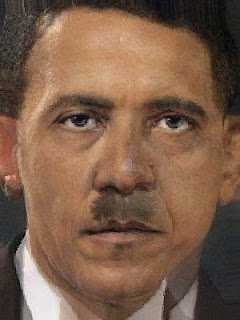 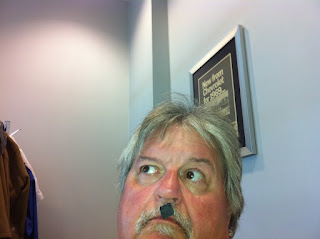 Hats off to ESPN for dropping the opening
song from Monday Night Football.
For those of you that don't give a Rat's Ass,
Hank Williams Jr. during a recent interview on that
"bastion of truth" network FOX, compared our President
Barry O'Bama to Adolf Hitler!!
That Bocephus Mother Fucker needs to keep his Redneck
Pie-Hole Shut!
ESPN has used Hank Jr.'s Song 'Are You Ready For Some
Football' as it's intro for FIFTY-FIVE straight Monday
Night games now, but they pulled the plug after that right
wing rant. Besides, I don't think O'Bama hates Jews. Before
he met Michelle, he used to bang Whoopi Goldberg!! Isn't she
a Sephardic Jew? Anyway, just because one might look like
Der Fueher, doesn't mean you're a'One-Nut,Paper-Hangin Megalamaniac'!
Yes folks, I'm in Virginia now, see you Thursday 8:00 PM for
The Friday Funfest...Auf Wiedersehen!!!
Posted by G-Man at 8:00 PM

bochepus mofo? ok that cracks me up. but yeah, i am glad they pulled the plug on that yutz if he made such a comparison. the whole comparison to nazis whenever it is used really lessens the concept of what was done to so many millions of jews, gypsies, handicapped people, and homosexuals. save it for referring to people who actually engage in genocide.

so i am keeping my eyes open for a g-man sighting...seriously just shaking my head when i saw the interview...

See... who needs to watch the news when I have you! I will have to google the interview... Oh My. Watched it... I think the Fox News Anchors were a bit put out with that F.W. Jr's statement as well! Too bad, as I did like that song for MNF.

I'm up here in Canada, (the socialist country that some Americans like to banter about) but I really have no idea why the people down south are comparing Obama to Hitler, comparing anyone to that lunatic is very offensive, Hitlers programs were about killing people he didn't like, Obama just wants to provide health care for ALL. My husband had a herniated disk in his back a few years ago and we probably would have gone bankrupt if we didn't have the health care we did.

We've missed this story over the pond. WHY did he think Obama was like Hitler?

Oh my G- (I know the abbreviation)
grow up America, for heaven sake...
(Ok,) grow up SOME of America- but hurry up, time is running out.

Freedom of Speech? What's that?

Missed the interview, but now I'm going to have to google it.

Bocephus made some good songs in his day, but when he started pallin' around with Sarah Palin during the last election I knew the Jack had finally eaten his last brain cell--this dumbass Hitler comment just frosts the cookies. I did like the football song though back when I used to watch the NFL play golf.

I'll be back later to play 55, in a somewhat cheating way which I hope I can get away with.