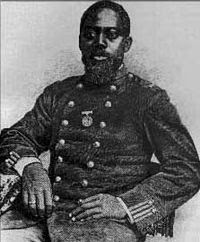 The assault on Fort Wagner in Charlston was brutal.
Seeing that the flag bearer of his regiment, The 54th
Massachusetts was gravely wounded, Private Carney
grabbed 'Old Glory' just as he was hit with the first musket
ball. Two more hit him as he carried the flag back to Union
lines, it NEVER touched the ground!!!

William Carney was promoted to sergeant, and after the
War became the 1st African American to receive The
Congressional Medal of Honor. He died in 1908.
This weekend we honor all brave souls that fought and died
to protect our freedom.
If you or anyone you know has written a Friday Flash 55
Please come tell The G-Man!!
I will visit, read, enjoy, comment.....Then BOOK!!!
So from the most grateful host from coast to coast...
Have a Kick Ass Week-End!!!
God Bless America...God Bless Freedom!
Posted by G-Man at 8:00 PM

beautiful capture of a valiant moment in our history....apropo for the weekend...have a great memorial weekend...

We can always count on the G-Man to put a Holiday weekend into perspective. Enjoy.

HERE is my Free Falling 55.

An excellent post for Memorial Day, and a reminder that the tradition of service that keeps us free begins long ago and includes us all.

I'm playin, though mine is not about the holiday:

Always happy to read about what brave African Americans have done!

I stopped by to say
Especially today
If you come my way
Then be sure to say
A Happy Birthday...to me!

War stories are my favorite. All that Passion, glory, pain and youth.

Great story in tribute to a very important weekend - although not a holiday in Canada, I too will take a moment to think of the brave souls that have fought and died for me.

A brave man indeed. I love stories of the bravery of those young guys in any war.

It's just a dream

Happy memorial Day to all
and thanks to out host for the weekly fun packed in 55!

G thanks for sharing this story and also sharing with One Stop. People are putting tributes up all weekend about a person, war ( and loss) in general. Very touching posts.

Kick ass story, G-man. Has the ring of truth.

I can almost see this being made into one of those "Schoolhouse Rock" things. :)

Hope everyone has a wonderful and safe Memorial Weekend and it's thanks to the brave souls like Sergeant Carney that it is even possible.

I wish I knew how to leave a direct link to my post, what am I doing wrong? My 55 is all in fun today.

Mine is here: The First Assignment

A great tribute paid within your words! A brave man indeed.

Wishing you a nice weekend xx

A beautiful 55, G-Man, and perfect for the most humbling of holidays.

Thank you for making Fridays that much more fun and have a lovely holiday.

Very nice 55, G...and a history lesson for me, pretty good considering it is tickin toward 3! A wonderful tribute! I'm doing a tribute too but not nearly as noble as your historical piece. Have a fab weekend!

Excellent memorial to a brave man.

i so much like reading your true events based fiction .. makes it so much more impactful !

Thank you for this tribute.
I added a small contribution towards your flash 55 here:
http://daydreamertoo.com/2011/05/27/salute-to-the-brave

have a great weekend too, G-Man!

Perfect post in honor of those fallen soldiers and those still fighting for our freedom. Thank you for honoring all of them.

That sir was a piece of history I had never heard. thank you!

A wonderful story to highlight the bravery of our men and women in uniform and of the purpose of this particular holiday!

I participated and can be found HERE

My link does not work!!

Here my flash 55
My Blog

what a wonderful tribute to this man for this holiday. thanks for giving us a specific glimpse of one who gave his all.

This is fascinating to me as I have stood on the tiny "island" of Fort Sumpter and imagined the devastation that occurred. There really wasn't much to protect anyone and not many places to run as these are tiny bits of land. The "islands" surrounding Fort Sumpter, as you know, had even less protection, I believe- I think the Fort Sumpter "crumpled" pretty quickly. I need to go find those photos and post them Monday! :)

Nice tribute of a patriot from my home state, G-man.

I'm in with Just Desserts? (Did you doubt?)

Have a great weekend everyone!

I Live In Stars

Eglantine
is 55 words if you don't count the title.

A beautiful blow...
I am sure those brave souls appreciate such a honor.

fabulous 55.
Thanks for sharing..

Trying to write a story, not a poem, yet still NEW hand ..

please don't get upset when you see the "make art not war" badge/doohickie in my sidebar ~ if you scroll down two posts, you'll see that even though i wish there were no wars, i am 1000% behind all of the men and women in every branch of the service all over the world.

have a great weekend. dani

I have tagged you. There are six questions to answer. You can find them (and the answers I gave) on my blog. Hope you have fun doing them.

I am learning about your history...Thanks!

I am late with mine:
jingling chains

This is a first for me...reading yours inspired me. I don't seem to know how to link this though.

Hi G-Man, thanks for the visit. I will try again, and will try to be earlier, but I do tend to be ''fashionably late.' lol Also, I'm certainly not Ms. Knowitall, because I don't know how to link my blog here. Can you explain and then maybe delete this comment? Thanks, and thanks for the forum.

Just discovered your site. My poem worked out to exactly 55 words! I'm late in posting, but hopefully not too much!
http://lolamousedroppings.blogspot.com/2011/05/city.html