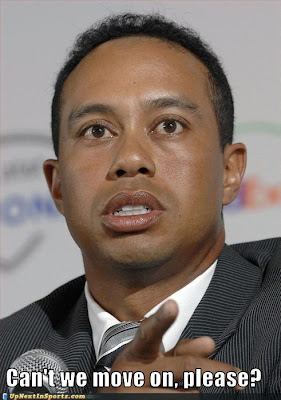 .
Ok...
I know that I said last year that I was tired of
all the Tiger Woods Hoopla. But look, he lost his
family, his reputation, about 400 Million Bucks,
and he lost his game. He hasn't won a tournament
in over TWO years!!! Every Big Mouth Hooker
that he banged across America, has either talked
about him on Howard Stern's show, or wrote a "Kiss
and Tell" book about him. Enough is ENOUGH!
Not so fast my friend! The British Press is RAILING
poor Tiger right now for something TERRIBLE that
he did Sunday during the final round of The Dubai Classic.
He Horked a Loogy ON the putting surface at number 12!!
(He spit on the green)
Ewen Murray of The British Press called Woods, "Disgusting,
That was one of the ugliest things you'll ever see on a golf
course!" They also called him arrogant and petulant.
They raised sich a hissy fit about this incident that he is
now being fined an undisclosed amount for "breach of some
hoity-toity bull-shit etiquette thing"!
Hmmmm... Golf greens. Birds shit on them, slimy worms
have worm coitus on them, it's JUST GRASS!!!
C'mon...He apologized on Twitter!! Cut hims some slack...
Peace...!!!
Posted by G-Man at 7:20 PM

Hahaha...at first, I was tempted to think "Ewww..." when I heard about TW's latest indiscretion. But now that you put it in perspective for me, I would have to agree. Not like anyone has to LICK the damn grass, right?

I can only surmise that it must have been a slow news day...

And there I go, leaving comments under the wrong login again. FYI, my dear friend G...that is actually ME.

*Sigh*. Why won't blogger let me merge my two identies?!?

yeah i think its time to move on...golfers can be...not your typical ones...the weird ones...so up tight...

Seriously, leave the dude alone, he's paid with his ass for his ass.

What he's really lost is his mojo.

"One of the ugliest things you'll ever see on a golf course"?

Clearly, they have never seen me play golf!

I'm wracking my brains trying to remember who it was who spit on the course during the Pro Am tournament in Pebble Beach this past week. No one said a word about it though the camera switched to someone else pretty quickly. But seriously? I guess people like kicking a dog when it's down...

He could have at least used the cup like Sergio. No couth.

I really couldn't give a flying f*** what TW does but anyone spitting anywhere turns my stomach! :(

I hate spitting, but geez people, give the dude a break. Everyone needs a second chance. I'm sure he's learned his lesson 20 times over (and if he hasn't, shame on him) so people need to let it go already.

Spitting in public is just gross, no matter who it is. Ugh.