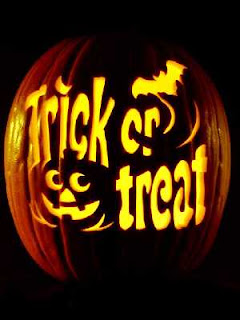 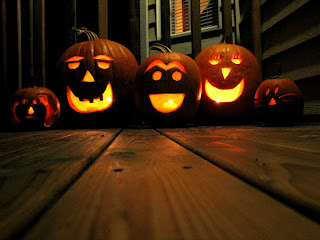 .
.
.
A Mr. Freddie Krueger from Elm Street USA asks...
"Dear Mr. Knowitall, How did the tradition of carving
pumpkins and Jack-O-Lanterns evole? I LOVE carving and slicing things"!
.
Uh...Freddie? I can answer that...
Pumpkin carving began as an Irish tradition.
But instead of pumpkins, they would use turnips,
potato's, and beets. Basically they carved anything that could be carved!
Candles were placed inside the carved veggie to ward off evil spirits.
When the influx of Irish immigrints began to hit America in the 1800's,
They found that Pumpkins were bigger and easier to carve, and they
have been a Halloween tradition ever since!
Like I said before, candles were lit on All Hallows Eve to ward off
the Evil Spirits roaming the Earth, but they also served as a Beacon
so that their loved could find their way back home.
.
All this pumpkin carving talk has made Mr, Knowitall grow weary...
I bid you Adieu.....

keeping my candles lit...and a turnip would give off quite a different smell...maybe thats just the way my mom made them...smiles.

Haha...thank goodness they decided upon pumpkins. I mean, imagine it - Halloween specials just wouldn't be the same otherwise. Who would want to watch Charlie Brown and The Great Turnip?!?
-C

My wife loves beets but I'm not a fan - I'd rather carve them than eat them. But carving pumpkins is WAY better.

I've got a nice 41 lb pumpkin from my garden to carve this year. I'm still not sue what I'll carve this time.

(This is what I did Last Year)

Turnips ARE evil, so thank goodness for pumpkins.:)

Although tater carvings (and carved apples) look really cool after a night out, tiny carved veggies are not as fun as giant hollow squash. How did they fit candles in spuds, turnips and beets?
Love the information, G-man.

Do you trans-Atlantic people only have small turnips then? Everyone seems to think they wouldn't work. I grew up with turnip lanterns because us Brits had never heard of pumpkins when I was a kid! Took us all day to carve a lantern but they were tough enough to suspend from strings and carry on a stick.

cool!! i never knew htat and it is one of my favorite things to do!! thanks g-man!!

Hey, if turnips are tougher than pumpkins, then they don't smash as easily!
NO ONE is smashing my lantern this year!
Di

They carve pumpkins in America because everything in America happens to be king sized.

I can't finish a small size coke in America!

those are rather awesome pumpkins. Thanks for the info!! there's no such thing as too much info if you ask me :)

I knew this bit of history, but I've always thought it would be so much harder to carve something like a turnip.