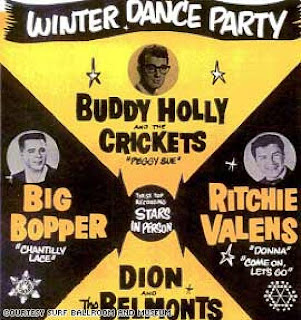 The heater on the tour bus had broken down, and it was freezing!!
Frustrated and miserable, Buddy decided to charter a plane for the gig in Minnesota. The Beechcraft only held four including the pilot, and Waylon had already given up his spot for J.P.
Ritchie looked at Tommy..."I'll flip ya for the seat".


Waylon Jennings was a guitar player for Buddy Holly as a member of The Crickets.
J.P. Richardson was known as The Big Bopper.
Tommy Allsup was also a member of The Crickets.
Ritchie Valens had NEVER flown before... He won the toss!
Don McLean called February 3, 1959..."The Day The Music Died".
If you or anyone you know has written a Friday Flash 55,
Please come tell The G-Man!
I will visit, read, enjoy, comment...Then BOOK!!!
So from the most gracious host from coast to coast...
Have a Kick Ass Week-End!!!
Posted by G-Man at 8:00 PM

How quickly life turns on a dime.

Cranking up the volume, over here!

Conversation for one, second to none... brought to us this week by Mojo.

Bye-Bye Miss American Pie...
Drove my (427 big block) Chevy to the levee but the levee was dry...

And we'll always wonder... what if?

I was gonna say I'm up, but I see I've been Yahtzeed. Thanks Ti!

haha. and I wonder who wins. Buddy Holly? I wasn't born yet! lol. I've posted mine too.

I remember the movie and loved the song as a kid. We could cover quite a few miles listening to that one. Great job, friend.

Here's my dude on the beach.

Oooh...that one gave me shivers. Such a sad story, so much lost all in one moment!

Good one, gotta go la bamba, mine is up, and just as sad.

I'm too young to remember, but I think dad has some of that music.
Here's more Yes Man: ONE

In 55 words, you made me think, made me sort of sad, AND you put a wonderful song in my head.

Thanks again for another Friday 55. :)
Mine's posted here!

How ironic was that. Win the toss and lose your life.

The day the music died, indeed!

Nice little piece that really makes you stop and think. Life is fleeting and Fate is a temperamental mistress.

Mr. G -
I remember this happening. So sad. Just one more thing that reminds me how fragile life is. We best make the most of each moment, right?

I had no idea Waylon Jennings got around so much.

And a very sad day it was, the day the music died. Don McClean's lyrics rank as some of the best ever, in my book.

I like this 55 very much indeed. It seems to fit my mood. Maybe it's this chilly night that has me blue. It's freezing!

The day music died indeed - touching tribute, G-man. It was before my time, but I remember seeing it in the La Bamba movie.

My 55 is The Pages of Every Book

so tragic, the way the music died! your 55 said it all, conveying just how simply the decision was made...way to go, g-man!

That was a sad history lesson. Talent gone in a flash
my Flash 55 is at http://wp.me/pDORj-wA

It's me again- 4am, and what has just come from my flying fingers? 55 words, totally unsought! Has to be a sign, I'd say...
probably of impending doom - or do I mean madness? :)

"the day music died" Such a hunting phrase!
My 55 is now up!

Wow. What a 55. The day the music died.
Well, I'll have something on a much lighter note posted tonight after midnight Pacific time.

Oh, the fickle finger of fate. I remember that day well. Good job, G-Man. And I learned something.
I never knew Waylon Jennings was a member of the Crickets.

Didn't know the back story on that plane crash. My 55 is up. You can find it HERE.

What a tragic turn for rock and roll. Wonder what Buddy Holly would have done...if he would have gone country or not.

A memory of mine is
HERE

The way life falls can be cruel or lucky. Nicely done.
You'll find mine here.

My 55 this week is called "Red eye". You are all welcome to check it out.

Mine is up. And is not sad

Used some of Buddy Holly lyrics to make this week's story up. Read the illustrated story Have a great weekend.

Boddy Holly...Oh, my yes! I still love his music to this day. Now I'm awake, I shall go on a few visits, and you're dead right about incontinence! I'll take insomnia any day.LOL :)

The day the music went down the tubes. Well done my friend. Mine is up HERE. Have a great Friday :)

The way you tell it in your 55 brings out just how tragic that plane crash was. "I'll flip ya for the seat". Chilling!

You'll find mine in this post: Stuck in the Mud

that was a sad day Galen and it was the day that real music died.
I'm posted and ready to be read thanks for stopping by if you all decide to heres the link just click it and your there you won't be sorry.

that was a sad day Galen and it was the day that real music died.
I'm posted and ready to be read thanks for stopping by if you all decide to heres the link just click it and your there you won't be sorry.

This was very nicely done.

One of these day's I'll figure out how to post a link. Sorry.

As soon as I saw your day's cover graphic I knew what the subject was gonna be...this was quite poignant really...an eye opener and a bit of historical fact. Great job!!!!

fabulous drama,
but in 55 words only,
how mind-blowing!

thanks for the trivia info. some of it i had "heard through the grapevine" -- i know it has nothing to do with what you've mentioned...lol

i'm working on mine -- hopefully later...

we just never know do we?

i played again this week

Never knew that about Waylon Jennings...you're a fountain of arcane information Galen.

Strange how funny life is right?
Flip ya.. I always hate that. LOL

Really nice. They did Don Mclean's America Pie on the radio the other day, with commentary throughout the song with all of the references and allusions. I'd never heard it in that level of detail before. Pretty cool. My 55 is up at http://bit.ly/8dt963. Have a great weekend!

Pile of talent died that night..

Yes it was a great loss that day..
thanks for the reminder.

It was indeed a sad day. My 55 has death written all over it as well, but in a far different way.

Good to be back with my 55ers.

hey g-man, not trying to bog you down (i've been here already today) but ever since i read your 55, my mind has brought back so many songs from that wonderful time. i'm a child of the 70's, turning 13 years old in april (thanks for the shout out on the 11th) of that year, my music likings probably differing from what you cut your teeth on BUT, lyrics from a few years before that are filling my head and i'm surprised at how many songs i can sing along with! you made my day and i just wanted you to know it :)

This was a very sad day for the music industry and for fans everywhere.

Mine is up at:

What an eerie remembrance. Very good! I really enjoyed this!

My FF-55 is up, too, at http://horaceandbabydoe.blogspot.com/

First I had to wrap my head around the fact this was Friday. I can't believe how fast this week has gone!

Have a good weekend!

an award for you.
cheers!

Too sad! Wonderfully writ! Thank you for sharing your brilliant F55!
Mine is considerably silly, as usual. Trying for light. Confessions of a moon brat! I was shown how to add the link to my post, but am on a fast track to (hm???) busy~ness and haven't implemented it yet!
Have a kick ass week Mr. G!
I posted on http://allisonians.blogspot.com/
Caio!

Lovely and sad G-Man. I am going to give this challenge a whirl. Check mine out over here, http://krigek.blogspot.com

You are a master at the deep, as well as the lighter stuff. I am humbled to know you.

And Mr. G-Knowing-All-G-man, I am still trying to catch up with the Thursday Poetry Rally Festers, so I did not 55 today.

But... when I do post my next 55 it will not only be for you but ABOUT you!! Yes, indeed, your words on my blog the day have set my whiring brain all a-twirling.

Now... if you want to hear me singing my song about when I had a a wedgie on my wedding day, pop on over to Funster Town and see me and the band in all our wedgified glory. That's my web offering for today. :)

G-Man,
You are getting funny and lovely,
Thank you for behaving like a 29 year old woman in my place, in this case, I treat you as a blogging buddy and love your young and playful spirits.

So much chance in life.

I love this. I'm a massive Buddy Holly fan. My birthday is strangely enough on the 3rd of Feb. I went to see where the plane came down a few years back on the anniversary of his death and my birthday. Also went to a concert at the Surf Ballroom where my friend Bobby Vee was playing.

A trip I will NEVER forget.

You have a very good blog that the main thing a lot of interesting and useful! erectile dysfunction Read a useful article about tramadol tramadol