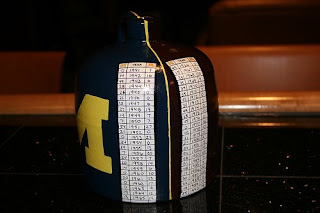 First of all let me say congratulations to The University of Michigan for beating Minnesota 29-6 in Saturday's battle for the Little Brown Jug.
In a very dismal and disappointing season, keeping a Michigan Tradition alive and successful is a small bright spot. As a Michigan Alumni and an avid fan, We have always been led to believe that the Jug was the oldest trophy in Division One Football. At the half during Saturday's game, a trivia question was asked, 'what was the oldest trophy in football'? Much to my amazement, the answer was The Territorial Cup, given away to the winner of the Arizona/Arizona State football game first in 1899!!
How can this be? Arizona wasn't even admitted to the Union till 1912!!!
You know what I say?.....BULL-SHIT!!!!
Have a Great Week...Peace...!!!
Posted by G-Man at 3:11 PM

What, are they attempting to rewrite history? No fair! Anyway... I stayed home today. It's coooooold. I am not pleased about the onset of winter.:)

Technical Foul! Not a State, not a record, that's what I say... Rough year, and they want to stiff us on this too? I call Bull sh*t!

YOU are Mr. KnowItAll.

Take comfort in that.

Oh come on. I saw all those other "trophies" if you want to call them that. Give me a break. The Little Brown Jug has such a history behind it. Oldest or not it is the best because it is our tradition.

That game felt so good. It makes me feel like hoping for a win against Ohio State. I know that is asking a lot but it just felt that good.

glad your team is doing well, ours isn't which I am sure you have heard and probably seen the Vols this season. Oh well I love them anyway.

Have a great day!

well congrats. we take victory where we get it. if your wins this season were few i am glad one came when it really mattered.

I'm not a big sports fanatic...but going to a college game is really exciting...one of my alums is the University of OKlahoma..go Sooners! :D My niece went to Michigan...hey she's now a Lawyer...so, thats a good thing and I also have a cousin who lives in MI so I guess I should watch one of their games! ;) go Jugs...

Queenie...Thank you Dear for that compliment.