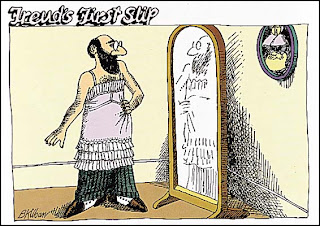 Hi everybody...It's been awhile since I posted anything that resembled anything thought provoking, so lets have a go at it..
A couple of days ago, a fellow blogger (who shall remain nameless ) E-Mailed me with something quite disturbing to her. She had a very vivid dream, AND I WAS IN IT!!!
I asked her if I was mean to her, she said 'no, But you had Super Human Strength, and shopped at the Good-Will"!!..Wow...That is kinky!! And I certainly can understand her concern, but I tried to assure her that it was just the banana split she had just before bed-time...
We shall see....Anyway, here are a few very notable quotes from the Father of Dream Interpretation...Sigmund Freud, enjoy!!
.
"America is a mistake, a giant mistake!"
.
"When a man is freed of religion, he has a better chance of leading a normal and wholesome life."
.
"WHat progress we are making, in the Middle-Ages they would have burned me at the stake, now they just burn my books!"
.
Thought, is action in rehearsal."
.
"The more the fruits of knowledge become accessible to men, the more widespread is the decline of religious belief."
.
"Neurosis seems to be a human priviledge."
.
"The goal of life is death."
.
"The first human being who hurled an insult instead of a stone, was the founder of civilization!"
.
"The great question...Which I have not been able to answer, despite my 30 years in research into the feminine soul, is.."What do women want?"
.
"Sometimes a cigar is just a cigar!"
See you all tomorrow.....Peace!!!
Posted by G-Man at 9:32 PM

Freud and his dreams. Sometimes a dream is just a dream, I think. I never remember mine -- or shop at the Goodwill or try to tell a man what women want or ... smoke cigars.:)

I want Freud to be my therapist.

I think he's the only one who'd do me any good.

I'm gonna have a seance.

i cannot think of one instance
where a banana split
instigated a dream...
a banana, maybe...

and Strumpie?
believe me,
you do not want Freud
to be your therapist.

just imagine
if everything in life
was exactly as it was
meant to be,
and we were perfect
just as we are?

each of us
an original work of art...

then we wouldnt have to fix anything
and Freud and the Freudettes
would be out of a job
and we could simply
just enjoy our lives....

My dreams are insane!!! There are times that I feel that they last the whole night as to where I can wake up and go back to sleep and pick up where I left. Did you know that most dreams last only 2-3 seconds?????

Strumpet....we can have the seance at my house. I have a ghost that lives here with us. Robert thinks I'm weird....little does he know "it" really does exist!

And I've always wanted to meet a ghost.

Is your ghost single?

I don't dig on EVERYTHING Freud had to say, but I think he was spot-on about a lot of shit.

I'm not big on his penis envy thing.

I mean, why would women want a dick if they can just don a strap-on and have the best of both worlds?

I think that was just Freud's own clit-envy talking. Projection at its fullest.

But, there WAS a LOT of stuff he brought into play that was simply mesmerizing and I would TOTALLY have had a gay ol' time laying on his couch.

But, I'd have to say he was probably a dude that was not for everyone.

I DO enjoy my life.

But, I don't enjoy it sometimes too.

I think I could be enjoying it a whole lot MORE.

Hence, the joys of modern-day therapy of which Freud was the Godfather.

Unfortunately, I bring up sex and the girls I am talking to seem to get more excited than they do about actually trying to help me with anything, but that's because they are a lot younger than me and I am going to the free therapy at school where my therapists are interns.

Now that would be a whole different ballgame.

I could actually maybe learn something about myself, or at least have food for thought.

You wanna know where I'm at right now?

We are trying to incorporate a reward and punishment system into my life so that I can accomplish some menial things.

If I go and get an application for a job this week, I am allowed to go out for sushi.

If I do not go and get an application for a job this week, I cannot go out for sushi.

This is my therapist.

I kid you not.

I'd SO freaking be better off with Freud.

However, I AGREE with you, Jazzy-licious. I AM an individual. I am perfect the way I am. I just KNOW there are things holding me back deep within me that prevent me from doing some of the things that I want to do. I have to find what those things are.

Sushi, or no sushi, is NOT the question.

Nor is it the answer.

Maybe I just need to be as positive as YOU.

Hence, the therapy in the first place.

Ugh, sometimes, Jazzy....I simply don't even know where to begin.

It totally fits into my life right now.

And it is totally making me think.

I thank you for this feeding of my brain.


And, Jazzy, I thank you for making me think. I need it.

Guy asks his buddy "Did you ever have a Freudian slip?" "What's that?"buddy asks. "It's where you want to say one thing, but something else comes out". Buddy says "I had one this morning, I was going to ask my wife to pass the sugar, but what I said was "You lousy bitch, you've ruined my life!".

Great quotes. I don't have memorable dreams often, but when I do...I usually jaunt them down in a little notebook I keep beside my bed.

In years passed, I would use a dream interpretation book to try to translate them, now I just use them for fodder in my books... :D

mel gibson answered what women want very expertly during an interview for the film by that title. he said, "I believe what they want lies somewhere between chocolate and conversation."


i rarely remmeber my dreams but when i do they are doozies. either completely bizarre or pregnant with all sorts of meaning.

Mostly my dreams are just rubbish, if I can remember them at all. Sometimes though I have prophetic dreams, not very often but when I do it's a bit scary.

Sometimes I dream and sometimes I don't. When I do dream it is rare that I remember them however if I am really really tired or sick I always have weird dreams.

Have a great day!
HUGS!

The goal of life is death... sounds a bit heavy to me. Freud was a strange one.

I usually dream quite a lot and remember them - I think it is because I suffer from insomnia every night and doze off a few times. I usually dream about my loved ones.

I had a dream last night about your motorcycle.

I mean, it MUST have been about your motorcycle.

I dreamt of these really strong vibrations running along the insides of my thighs.

I've always wondered about the Fruedian slip. I never knew he wore slips at all...

Lovely Serena
Cigars are rather tasty.
Try it, You'll like it!!
:D xoxbgxoxo

Strumpet..
I have a ouija board

Hmmmm...
You know most of Freuds Patients were Jewish Chicks.
I don't know what that means, but it's true!!
xoxjjxox

Jildo...
You have a ghost?
Does Emmett see him?

Hi Ve..
Thanks for stopping by!!
galen

I don't know about the A+ on my final research paper, but I would love to play with your Ouija board.

I used to have one when I was a kid and we'd all play with it at our parties.