Did We Quit When the Germans Bombed Pearl Harbor?.... 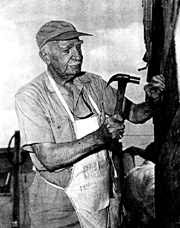 Hi everybody...Thank you one and all once again for the kind words and support that you all have shown be over the past couple of days. I'm very fortunate to have such great friends!
.
Today, my son Reese has to go to orientation at the local community college for the Fall semester. Every town and city in America usually has either a founding father, or one special person that embraces the community, and gives back what they deem the reason for their success. Flint has that benefactor in Charles Stewart Mott.
.
Mr Mott was from a wealthy family to begin with, have you ever eaten Mott's Apple Sauce?
"The finest apples, in apple land, make Mott's Apple Sauce taste grand"!
But during the early parts of the 20th century, he found himself in Flint. These were very exciting times indeed, and he became friends with such people as Billy Durant, and Louis Chevrolet, et al. These were the founding members of General Motors!!
Although Mott never ran an auto factory, he invested heavily in what he believed would be the future of America. He became a very wealthy man. But he never let his success go to his head, and he was a very frugal man. I can remember seeing him puttering around town in an old Chevy Corvair that he always drove himself. He wore the same double-breasted suit for years, and if he financed a project, he was right there pounding nails, and digging trenches.
.
...Anyway, he helped establish Flint Junior College in 1922. In 1955, it became Flint Community Junior College and tuition for County Residents was subsidised. In 1970 it became Genessee Community College. And after Mott died in 1973, they honored him by renaming it what it is today, Mott Community College!!
For years, and even today, if you attended that college, you always referred to it as "JC"..
For the kids out of high school that had no real game plan for the future, instead of paying the long dollor to flunk out of Michigan State, you could flunk out of college at JC for one third the cost!!
.
...Sometimes kids are NOT very proud to attend there. They look at it as some sort of punishment or Purgatory for not studying in high school. Thats very true in some cases, but they have an exceptional Pre-Dental program, a tech center that is phenominal, and it is a great stepping stone to any major university in the nation. Both me, Mrs. G, my friend Alex, and dozens of other close friends of mine attended JC, and went on to graduate from Flint-UofM!!
.
When Reese told me that he was accepted there, I pulled him aside and shook his hand, and then proceeded to tell him how proud I was that he had planned to go there. I believe my parting words to my little pep-talk was..."They were the best 4 years of my life". (of course it's only a 2 year school, but my first year I majored in Eucre, and had to play catch up)..
.
Good luck Son, Dad is very proud of you!!
Posted by G-Man at 8:08 AM

Hey! I am a graduate of Grand Rapids Junior College!( Now called Grand Rapids Community College!) It was referred to as "Raider High", because it really was'nt a real college, was it? It was hard, and to graduate was more difficult than most Lib Arts Colleges, and when you got out- you knew your stuff! That's all the real world wants from you...

well congrats to reese! nothing wrong at all with saving a few bucks on the education. mr. mott would be proud of the frugality i bet. i love the way you've given the history of the place too. you always do a great job with this sort of thing. a trait you picked up at JC?

That is SOOOOoooooo-OH! awesome. He's going to have so much fun. I WISH I had done it the junior- college-first way back when I was younger!!

I spent a LOT of money at U. of I. the five years I was there and I STILL owe them so much money that I can't even get my credits from when I was there. I wasn't partying, I was just lost. Hell, I still am. But, I accept it a lot better now.

So, where am I at NOW, 15 years later? At a junior college. (err...Chicago Community College.) Cos I STILL don't know what I want to do with myself.

I want to learn how to play euchre!

The namesake of my school is pretty fun too. He was a Chicago Mayor for a brief time and supposedly--but never proven--had a penchant for donning womens' clothes. I think it's the PERFECT school for a Strumpet. Cos I think that rocks. He's no longer with us, so I guess we'll never know...

excuse me? for kids out of high school who had no real game plan? 17 years old, barely a puppy, and you're supposed to have a frickin' game plan?
the world is so fucked up...i just cant figure out why most of society thinks that all the illusion of having some fancy named shit or fancy looking shit in front of you is all that its cracked up to be...i think it was Rumi or someone, who said "there are 100 ways to kiss the ground..." who the hell says there is only one way to learn, and who is to say that people who glide mindlessly through some fancy named university, are actually learning anything? mostly they're eating and regurgitating the words, philosophies, theories of someone else, never taught to think for themselves, or to look deep inside of themselves and sense what they really want on this earth or what is right and true?
so fuck all that nonsense about higher learning...
some of the highest learning comes from doing your own thing on this planet and not listening to all the frightened mindless brainwashed people who couldnt think for themselves if you paid them.
listen to your heart, i say. its the best college in town...

ps congratulations, Reecie!
and what the hells wrong with Eucre ?
its math, aint it?

i am 41 and still w no degree. going to school off and on for blah blah blah years. but if i had known then, what i know now, i definitely would've started at junior/community college first. you can do most of gen ed courses at 1/2 the cost or less and in most cases it will transfer to the 4 yr college.

as smart as i was, i wasn't all that smart back then (if that makes sense)

Congrats and good luck to Reese!

We only eat Mott's Apple Sauce around my house.

It is good to see you made it home safely from the memorial this past weekend.

Have a good day!

The fact that he wants to go SOMEWHERE is a great start. Good for him! I'm sure he'll do fine.:)

Roflmbo cards Galen lol, well thank goodness you caught up so to speak. Congratulations to your son! A lot of times Junior Colleges are just a stepping stone to greater things, there is always pride to be found in what ever steps we take in bettering who or what we are.

Have a great tomorrow and a wonderful night.

I couldn't agree with you more!!!

Having to choose things, or pick things that I THOUGHT I was SUPPOSED to be doing, only set me up for all the wrong things, and I'm STILL trying to fix my life and figure shit out because of making decisions when I was 17 that I was too young to not know not to make.

I'm 36 and I still don't know what the fuck I want to do. Ugh. But, I'm slowly, slowly coming to terms with that.

Ciara Dear...
Thanks for your very kind words. Very thoughtful....G

Hi Breazy...
How ya been sweetie?
I'll try and stop by soon!
G

Thanks Serena Joy
You always say something sweet..
Thats because you are..
xobgxo

Melissa...
You have such a mastery of the English Language!
There's much more to an Okie, than meets the eye!
=P :) ;-)